At the police station II.

Second time in a month or so that I am called to the police station to report a hate crime.
The first time the officer taking my report tells me that basically Islamophobia is not that much of a big deal.
The second time (today), another officer is of the opinion that if I had not tweeted about 'controversial' topics such as extremism and racism, I would not have attracted the attention of the Islamophobic numbhead to consequently floods me with his racist filth (so in a nutshell, the crime is the victim's fault). When I ask him if his statement is not the same as asking a woman who was sexually harassed if she really had to wear that miniskirt, he gets upset and says, 'he is offended'.
Second time I am at the police station to report a racist / Islamophobic incident, second time I don't feel that those police officers are ... what they should be, professional, sensitised, on the side of the victim.
Second time in a month that I complain and that my complaint is dealt with in the most professional manner and that the duty inspector is as shocked about the comments made as I was when I realised what was being said to me.
Don't accept poor treatment. Don't give up. Keep on complaining, keep on protesting. You might think it's not a big deal or that it's not going to change anything anyway, but if we continue to swallow whatever we are being served, nothing is ever going to change. Ever.
Eingestellt von Lieselotte Keine Kommentare:

The five stages of getting feedback on your paper

1) Receive reviews: "This is ridiculous. Have they ACTUALLY READ my paper?! Reviewer 2 doesn't go as far in their criticism, so WHAT'S WRONG with reviewer 1?"
2) Later that night: "They are right. The paper is rubbish. My research is rubbish. I am rubbish. I'll never get anything published. I am just not made for academia..."
3) Speak to a good friend who's published a lot: "This is nonsense. They can't ask me to rewrite the entire paper in just two weeks. That's just completely unprofessional."
4) Think about it again: "It's all good. I have choices. I can decide what I want to do: revise and resubmit, only make some of the suggested changes, just submit the whole thing somewhere else."
5) Speak to supervisor, then editor of journal: "Aaaah, so THAT's what they mean. I don't actually HAVE to make all the changes, but can explain why I made some and not others. Reviewers are just humans, too ... who would have thought?!"
Eingestellt von Lieselotte Keine Kommentare:

"Prefer to be one who is overcome while being just, rather than one who triumphs while being unjust." (Imam Ali, as)
Eingestellt von Lieselotte Keine Kommentare:

That moment when you get caught making completely unreasonably demands:
"If you don't tidy up your stuff NOW, I am going without you."
"Ha ha, you want to leave me at home on my own?!"
Grrrrrrrr.
Eingestellt von Lieselotte Keine Kommentare:

At the police station.

Or: Explaining hate crime to those
who are here to combat it.

When you call on the phone to report racist stickers that you have seen in the city centre, everyone is very friendly. "I will forward this to my colleagues, Ma'am, can you come to the station to give a statement, Ma'am, thank you very much for calling, Ma'am."
When you arrive at the police station at 9 o'clock, a woman takes your statement. Blond hair, fair skin, middle-aged. It's you and her, in a stuffy room with no windows.
Police officer, blond, middle-aged: "So you felt that the stickers were offensive?"
(Relatively) young white hijabi: "I didn't just find them offensive, I found them highly offensive, and to be honest, I also got a bit scared when I saw them, for myself and my family. [insert bit about particular family background and ways in which this relates to the stickers] I have always felt safe in [this city here], but it changed (a bit) when I saw these stickers."
Police officer, blond, middle-aged: "But crime and violence, this something that happens everywhere, isn't it, it's a global problem?"
(Relatively) young white hijabi: "Well, yes, but these stickers are used by right-wing extremists to mark their territory and to spread fear. This is part of their strategy, it's part of their campaign. They send a message to people like me, to Muslims, to refugees, migrants, brown people."
Police officer, blond, middle-aged: "But this could happen to anyone..."
(Relatively) young white hijabi: "Erm, no. This is a hate crime. They specifically target one group of people. And sorry, but you, as a blonde, white, British woman won't be targeted by them. I wouldn't if it weren't for my headscarf. But me, the way I look, with this [points to her scarf], I am one of their targets."
Police officer, blond, middle-aged: "But if that was true, they could just put a bomb in a mosque - they don't do that."
(Relatively) young white hijabi: "Erm, yes, of course they do. [insert short excursus about recent attacks on mosques in the UK in general and [the region we live in] in particular, with particular mention of the Muslim grandfather who has just gotten assassinated - for being Muslim - a few days ago] ... "I can't really believe I need to tell you this. They are targeting Muslims, refugees, brown people, and everyone who, to them, looks like that."
Police officer, blond, middle-aged: "But you have that everywhere ... in Paris they just attacked people who were in the street"
(Relatively) young white hijabi: [insert a sentence about how that was a case of Islamist extremism ... which is different from right-wing extremism ... which is what I am talking about at the moment] "No. No, sorry, this is not right. I'm not going to continue like this. I am not going to speak to you any more. I want to speak to someone else. And I want to complain about this. Now."
When you go to the police station to report racist stickers you have seen in the city centre, you might come across a police officer who seems to have less knowledge about hate crime, Islamophobia and violent extremism than you do. Who shows a complete lack of sensitivity while dealing with a victim of a hate crime. Who is playing down an issue she is clearly not facing herself.
But you can complain. And (relatively) young white hijabi did. To the duty inspector and, after that, to the two female police officers assigned to take her statement. Two officers it was this time, both (relatively) young, one blond + white, the other brown + Muslim. Who agreed that this was outrageous, took the statement, chatted about this and that, were friendly, laughed, made little jokes, explained what was going to happen now.
When you go to the police station to report racist stickers you have seen in the city centre, this is the sort of police officers you should have welcome you. Not people you need to explain to that the crime that you are here to report is actually a problem.
Eingestellt von Lieselotte Keine Kommentare:

"No space for women"

What do you do if in a mosque there is "no space" for women? Faraz Rabbani advised the following. Says a lot about us as a community that we have gotten so much used to nonsense ("sorry, no women allowed; there's just no space, what can we do"), that we're close to be shocked when we hear such a simple, common sense answer (by a highly qualified, highly regarded sheikh, after all). 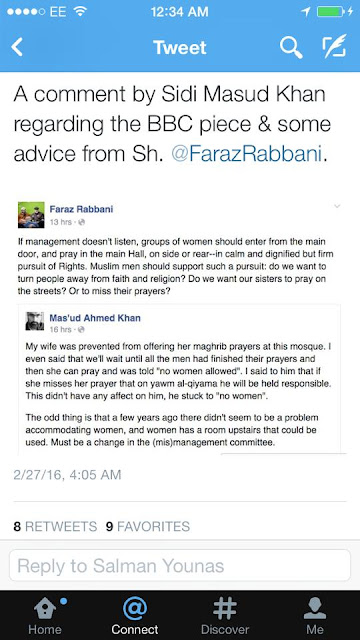 When a song was written for Northern Ireland, but works perfectly for Sarajevo, Beirut, Aleppo or Homs, too. It's the same pain, always.
"But when I returned how my eyes have burned
To see how a town could be brought to its knees
By the armoured cars and the bombed out bars


And the gas that hangs on to every tree
Now the army's installed by that old gasyard wall
And the damned barbed wire gets higher and higher
With their tanks and their guns, oh my God, what have they done
To the town I loved so well"
Eingestellt von Lieselotte Keine Kommentare:

When life hands you lemons...

Or: How I was chosen for a "random" security check, and ended up giving an impromptu live hijab tutorial

Sunday morning, at the airport. I forget to take off my watch, the metal detector goes off.
I think, 'they'll quickly check with the portable metal detector'. No, they want to search me in a separate room.
Ok, whatever. It's me and two female security officers who close the curtain behind them.
I think, 'they'll quickly pat me down and I can go'. No. Not that easy, not that quickly.
It's them, and me.
Female security officer (FSO) 1: 'Can you please take your scarf off, madam?'
Me [with a strong expression of WTH on my face, raised eyebrows and all]: 'Take MY SCARF OFF?'
FSO 1: 'Yes.'
FSO 2 [smiles, looking slightly embarrassed]
Me: 'Okkkk...'
I take off my scarf. FSO 1 pats me down from head to toe, doesn't forget to check my socks (because THAT'S where we Muslimist terrorist extremists hide our bombs, you know), a few minutes later she says I can put back my scarf on.
I reach for it. There is silence. And I think, 'You know what...'
Me: 'Well, at least you'll get to see now how I wear my scarf...'
FSO 1 and FSO 2 both look at me.
I force a smile.
Me: 'Yes, because there is different ways of tying it. I usually do it likes this...'
FSO 2 [looks at me pointing on my scarf, nods hesitantly]
Me: 'So first I put the scarf here. On top of this [I point on the undercap]. I always wear one of these underneath. Otherwise it can be really annoying when the scarf doesn't stay in place but keeps moving around. You know, that's just REALLY annoying. One time around and then a pin here...'
FSO 1 and 2 both follow my movements and nod in agreement.
FSO 1: ' And do you wear it in the summer, too?'
Me: [little excursus about light fabric, long sleeves, and breezy maxi dresses]
Both nod again and touch the fabric of my shirt when I hold it towards them.
FSO 1: 'Do you have scarves in many different colours?'
Me [laugh]: 'Oh yes, I do. But my favourite is pink!'
FSO 1: 'Pink is great!'
Me: 'Pink is the best!!'
We all laugh.
FSO 1: And makeup is not allowed?
Me: [short explanation about my personal preference (no makeup), scholarly opinions (divided), and individual choices (it depends)] ... 'and then there is those who believe it is not allowed but they do it anyway. But that, you have it in all religions, don't you, you have Christians, too, who do that...?'
They both nod enthusiastically and murmur in agreement.
FSO 2: 'And now this pin?'
Me: 'No, that one comes all the way in the end. Look, here. I'll use this one first, here, and then that one. See, now it is all in place.'
I look at myself in the mirror and see both of them turning towards my reflection in the glass.
Me: 'I just need to pull at little here, and there, and then ... that's it, done!'
Smiles all around, and I leave, pick up my baggage and look for my gate.
Eingestellt von Lieselotte Keine Kommentare: